Gallstones are stones which form within the gallbladder. The function of the gallbladder is to concentrate bile and store it for use when we eat. The bile is then squirted into the bowels to help digestion.

Gallstones form in the same way that sugar comes out of tea when tea cools – when you put too much sugar into a cup of tea, as the tea cools, it is unable to keep all the sugar dissolved, and therefore it comes forms crystals in the bottom of the tea cup. In the same way, when cholesterol or bilirubin (both found in bile) is found in high concentrations, the bile becomes so “thick” that crystals of these substances form at the bottom of the gallbladder. Over time, more and more substance accumulates on the crystals and they become gallstones.

So why does bile become excessively concentrated?

It can be due to:

Why do gallstones cause problems? 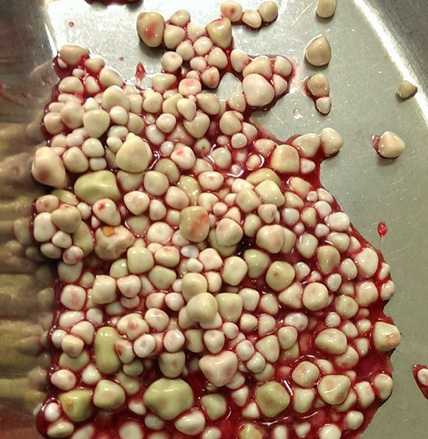 Caption: Numerous small gallstones found at operation for a patient who came in with inflammation of the gallbladder.

What symptoms do gallstones cause?

Whenever gallstones cause a blockage, it causes pain. This pain is usually located in the right upper part of the abdomen. It might be associated with fevers, sweats and loss of appetite. If it blocks the pancreatic duct causing pancreatitis, it can cause pain in the upper abdomen going to the back.

If the gallstone blocks the bile duct, it can cause jaundice (yellowness in the eyes and skin), dark urine and pale stools.

Severe cases of gallstone disease can be potentially life-threatening.

Importantly though, gallstones can also be asymptomatic.

How are gallstones diagnosed?

Gallstones are generally diagnosed using an ultrasound scan. Blood tests (liver function tests) may also be abnormal. Sometimes, other scans such as MRIs may be used.

What is the treatment for gallstone disease?

Ultimately, the treatment will be the removal of the gallbladder as that is the source of gallstones. (see Cholecystectomy). This can generally be done with laparoscopic surgery (keyhole surgery). The initial treatments of each of the above manifestations are slightly different and may include antibiotics and removal of gallstones from the bile duct using endoscopy (ERCP).